Doctors and medical researchers are resourceful people- which is of course why you put your trust in the medical establishment when you need help losing a great deal of weight.

What their resourcefulness means for you is that you have several options when it comes to surgical procedures which limit the size of your stomach.  In fact, Sleeve Gastrectomy is rated as the most popular among all the different types of bariatric surgery in the USA and Europe.

What is Gastric Sleeve Surgery? 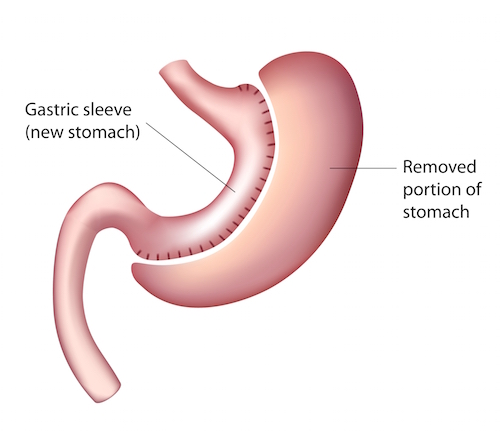 The name says it all: the stomach is transformed from a bag-shaped organ into a sleeve.  By reducing the size of the stomach by 80%-90%, doctors are surgically limiting the amount of food that fits in your stomach…thereby drastically cutting down the intake of calories.

No bypass is performed- this is a restrictive type of bariatric surgery (the other type is malabsorptive, where part of the small intestine is bypassed so food can’t be absorbed).  Gastric sleeve surgery was actually first developed as the first part of a 2-part surgical process called a duodenal switch.  It was followed by a malabsorptive type surgery, or bypass, at a later date.

Now, however, the “sleeve gastrectomy”, as it’s called, stands on its own as an effective method of helping morbidly obese people to lose weight.

The part that patients and doctors appreciate the most about the sleeve gastrectomy is that it’s performed laparoscopically.  That means the surgeon will not be opening up your body cavity with a huge incision.  He or she will be performing the operation by inserting a tiny camera into your body so they can see what they’re doing, which takes only a small incision.  Then, 3 or 4 more will be made to allow entry of very tiny surgical instruments to perform the stomach-reducing procedure.

Here’s A Video Of How It Works

What are the Risks?

If you like numbers, you’ll love the data on Laparoscopic sleeve gastrectomy procedures.  The risk of having major complications after the surgery is only 5%-10%.  If you’ve done your homework on exploring the various types of bariatric surgery, you’ll notice those figures are relatively low when compared to other surgical methods. That’s because, as you read earlier, this is a restrictive procedure, not a malabsorptive one.  Surgeons won’t touch your small intestine, won’t divide it, won’t have to reconnect it to the stomach…it’s all left intact, with original connections.  The part of the stomach that’s removed has no organ connections on it. So, what kinds of things can happen after a sleeve gastrectomy?

Finally, and this isn’t really a risk, Laparoscopic sleeve gastrectomy is permanent.  Unlike other restrictive types of bariatric surgery, this one is non-reversible, the only one where part of your stomach is removed.

One of the problems with being morbidly obese is all the side effects and health risks that come with it.  Very often, these include heart and lung disease.  For people whose weight has caused severe heart and lung disease, there’s a particularly unfortunate vicious circle at work.  The risk of bariatric surgery is now even greater, and in some cases too dangerous to undertake.  This is because anyone who has surgery faces heart and lung issues during the operation- it’s just one of the generic risks of surgery, like allergic reactions to anesthesia.

But add to the normal risk of surgery a severe heart and/or lung condition and it’s questionable whether the very thing (surgery) that could help cure a morbidly obese person is worth the risk.

That’s why gastric sleeve surgery brings with it a huge advantage: a short operative time – just one to two hours!

Are You a Good Candidate for Gastric Sleeve Surgery?

The Sleeve Gastrectomy is used for two types of bariatric surgery candidates, each at opposite ends of the BMI scale, plus a third type of patient…

How About the Cost of Gastric Sleeve Surgery?

For the cost of gastric sleeve, please refer here.  Remember, consider the cost of surgery against the cost of long-term health issues associated with being morbidly obese.  It’s your health, and your life… cost is a secondary issue.

WHAT YOUR BARIATRIC DOCTOR

DON'T WANT YOU TO KNOW

Enter your email below and we'll send those dirty little secrets to your mailbox!

You have Successfully Subscribed!